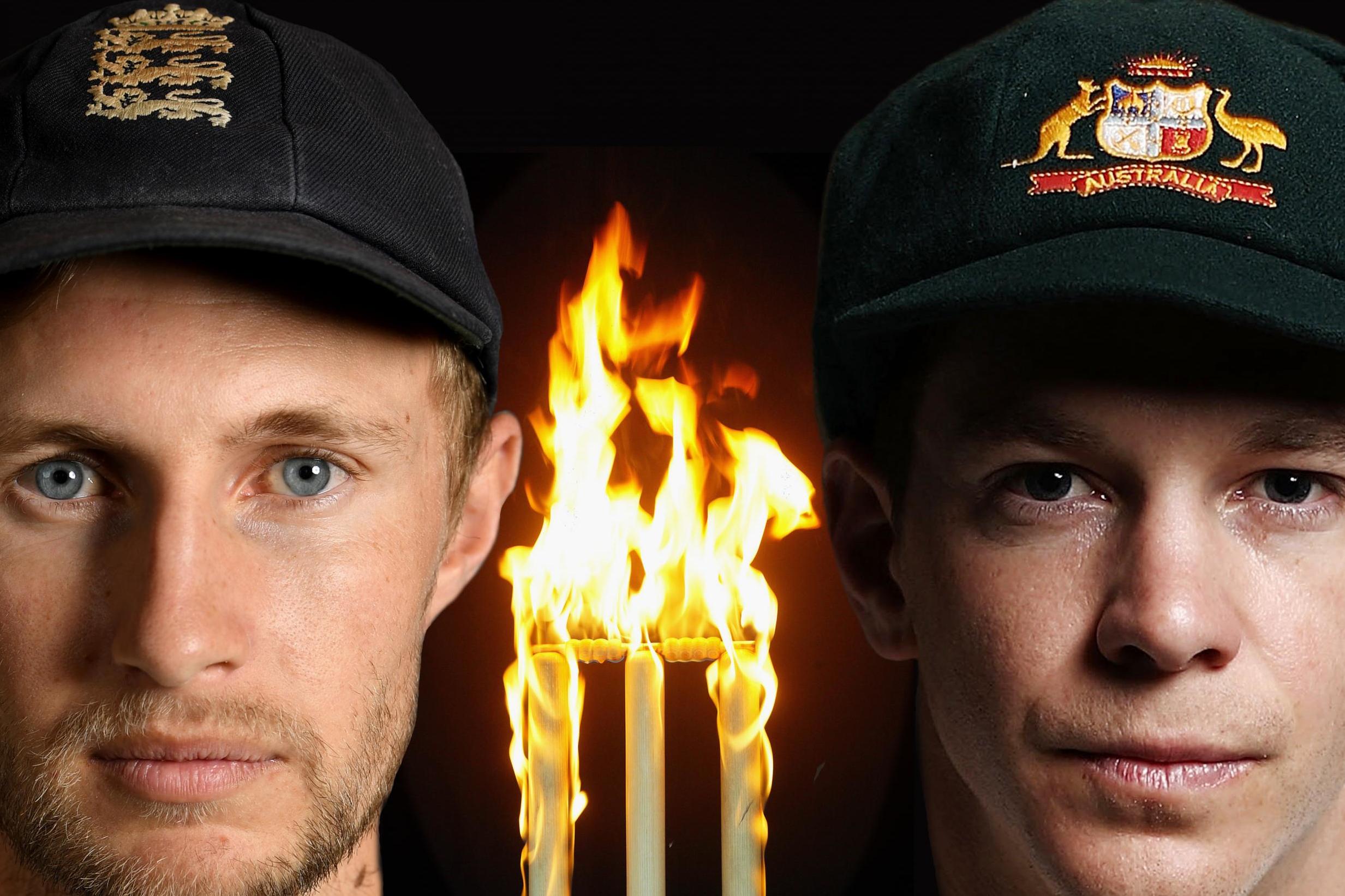 Welcome to the Evening Standard’s LIVE coverage of the Ashes 2019.

England opener Rory Burns and nightwatchman Craig Overton return to the middle on Friday morning with the hosts already aiming to save the fourth Test after just two days of cricket.

Australia posted 497-8 declared before putting England into bat for a difficult 45-minute spell in the final session of a day which was dominated by the tourists, with Steve Smith hitting a double ton on his return to the side.

Burns successfully negotiated a blend of pace and spin as the evening sun shone down on Old Trafford, but Joe Denly never looked comfortable against the Aussie quicks and was caught at short leg after several loose shots.

Burns and Overton will – weather permitting – return to the crease with England 23/1 and some 474 runs behind.

Joe Root works Cummins into the leg-side and moves onto 49. Rory Burns does likewise as they rotate the strike nicely.

England just need to get through these first few overs after tea, and then all of a sudden this could start to look like a very long evening session for Australia’s four-man attack. The likes of Marnus Labuschagne and Steve Smith may well be asked for a few overs.

The new ball is 30 overs away, which, in theory could be tonight, but will probably not come until the morning.

It’s been a retched series for opening batsmen, but Rory Burns has been by far and away the best of them, on either side.

That was almost the end of him though, and absolute beauty from Cummins, nipping away off the surface and it’s a hope and pray job for Burns. No edge.

Nathan Lyon to get things back underway – he looked the biggest threat before the break, but Rory Burns takes advantage of a wide one with a nice cut to the boundary for four.

Right then. A mammoth evening session that could end up almost three hours in length is about to get underway. A lot of work still to be done as the fielders return, soon followed by the batsmen.

Away from Old Trafford, Lasith Malinga has just taken a top-order hat-trick in Sri Lanka’s T20 against New Zealand to become the first man to reach 100 T20i wickets.

Terrific session for England. Burns and Root have given them a decent platform with an unbeaten stand of 100. They are still only in the foothills, though, and there is a seriously long way to go tonight. We can play until half seven, although the light might not fancy that.

Pat Cummins is emptying the tank here before tea – up at 90mph. And that’s the first loose shot we’ve seen from Root in a little while, perhaps eager to get to his half century before tea, driving and missing.

Australia want one more, but they won’t get it. That’s tea. Well played, England.

Nathan Lyon is back, which means the cheers are, too. That’s a tidy start, one goes on straight with a bit of extra bounce and beats Burns.

The next is too short though, and cut away for a couple and there’s the 100 partnership, off 204 balls.

Cummins is continuing with the short ball ploy, but in the main the Surrey man has done much better against those deliveries today. Still, when Cummins nails one like that there’s not much you can do, and he’s relieved to see the ball fly down into the pitch off his glove.

It has ebbed and flowed, this innings. Little bursts of quick scoring and then Australia find a way to tighten up. The main thing, from an England perspective, though, is that these two look comfortable whether they’re scoring or not.

There’s a few! The most controlled of pull shots from Joe Root for four.

Pat Cummins returns to the attack. 1-15 off his first seven overs. England fans, before you get too excited, Australia still lead by 379 at this stage.

Don’t Take Me Home, is the song from the stands, but they needn’t worry. We’ve still got three-and-a-half hours of cricket to come, minus the twenty minute tea interval.

Half an hour to go until tea, and that is gorgeous from Joe Root, stunning placement between slip and gully and it teases the fielder all the way to the fence to take him to 40.

A change of gloves for Joe Root and a quick word with Nathan Lyon, presumably about the health of his old chap. All good to continue, and Josh Hazlewood is going to return to the attack.

Out of the middle of the bat from Burns again, straight to Labuschagne at backwards square, but a misfield means they’ll get a couple.

Oof. He’s bowled pretty straight there, straight into Joe Root’s realm of delicacy. The England skipper will need a minute.

This is proper pantomime stuff now – when Lyon is bowling, the crowd are cheering every ball thrown back to him.

A long chat between Starc and Paine at the start of that over and the former responds with some much tighter deliveries. Just one from it.

Oooh, that is very lucky, and Joe Root is fuming with himself. Tries to play it too late, bottom edge, and that must miss his stumps by inches, but it brings three runs.

Comedy little moment here as Burns is out of his ground for a moment. By the time the throw comes in he’s safe, but there are huge ironic cheers, with a nod to Headingley, as Lyon gathers it cleanly. To his credit, he gives the crowd a wave of the ball.

Starc is all over the shop again, and Root gobbles it up, helping a straighter delivery down to fine leg for four.

Tim Paine has got to decide what he wants from Mitchell Starc. If he’s going to be an attacking, strike bowler, he’s got to be more threatening than this. If he’s going to split the workload fairly evenly with Cummins and Hazlewood, then he can’t go round the park.

Aussies haven’t left with the urn for 18 years… will England make it five home wins in a row?

Their seventh straight Ashes win as they handed out thrashings at Edgbaston, Lord’s and Trent Bridge. Then, at Headingley, Mark Butcher’s 173* pulled one back as England chased 315. Skipper Steve Waugh returned from injury at the Oval to score a century and secure the series. Glenn McGrath and Shane Warne shared 63 wickets.

The greatest series. 17 wickets fell on the opening day at Lord’s as McGrath’s brilliance carried Australia to victory. But when he went down injured at Edgbaston, England roared back, then dominated the draw at Old Trafford. At Trent Bridge, they crept home in another classic, then just held Australia off at the Oval thanks to a century from Kevin Pietersen.

This series did not lack drama. At Cardiff, James Anderson and Monty Panesar batted for 69 balls to save the draw, then Andrew Flintoff’s final five-for sealed success at Lord’s. Australia followed a draw at Edgbaston with a thumping win at Headingley. That took it to the wire at the Oval, where Stuart Broad and Jonathan Trott propelled England to victory.

An oft-forgotten series, partly because England were in the early stages of falling apart following an extraordinary run in which they reached World No1. England won a nailbiter at Trent Bridge, then comfortably at Lord’s. A draw at Old Trafford ensured the hosts retained the Urn before going 3-0 up at Durham, where Ian Bell made his third century of the series.

Australia won in London when the pitches were flat, England elsewhere when the pitches were livelier. Joe Root’s century set up victory at Cardiff, before Australia hitback at Lord’s. England then won at Edgbaston and Trent Bridge, where Stuart Broad’s 8-15 decided the series. Australia easily took the finale at The Oval but it was Alastair Cook celebrating.

A Nuclear War Between India and Pakistan Could Happen (And Would Change The World)...