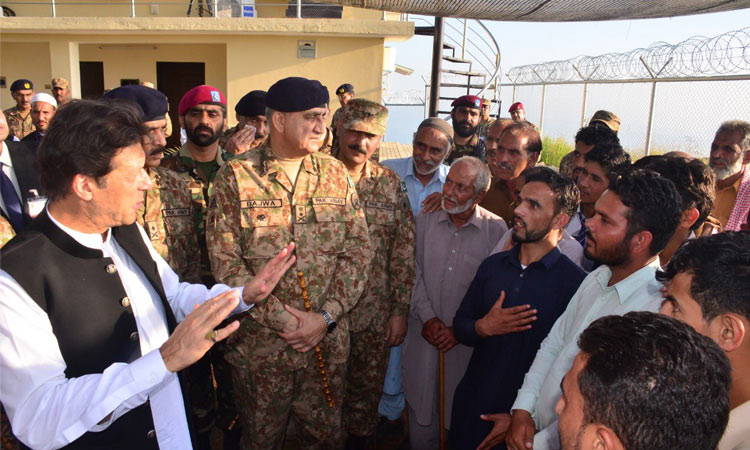 Lockdown in Indian Occupied Kashmir (IOK) is one of the worst instances of human rights violations, Imran said as he met families of martyrs and those injured in ceasefire violations across the LoC on Friday.

This year, the Defence and Martyrs Day was observed as Kashmir Solidarity Day.

According to a brief statement by the ISPR, Imran was also accompanied by Defence Minister Pervez Khattak, Foreign Minister Shah Mahmood Qureshi and Chairman of the Special Committee on Kashmir Syed Fakhar Imam. 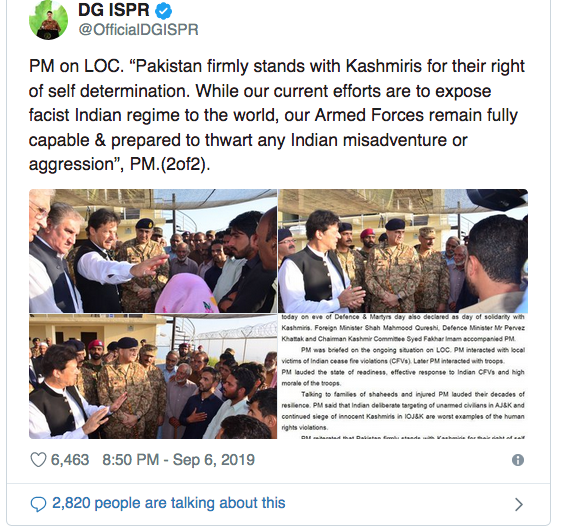 Pakistan observes the day to mark the anniversary of the 1965 war with India. This year, the country marked the day in “solidarity” with the people of Kashmir amid heightened tensions between the two neighbours over New Delhi’s abrogation of the special status for Jammu and Kashmir.

Earlier during the day, Imran called Kashmir Pakistan’s “jugular vein” and said that altering its special status poses challenges to the country’s security and integrity.

In his message on Pakistan’s Defence and Martyrs Day, Imran said: “For Pakistan, Kashmir stands as its jugular vein. Altering its status poses challenges to Pakistan’s security and integrity.

“I have also urged upon the international community to seriously consider the safety and security of India’s nuclear arsenal that is in the control of a racist and Hindu supremacist government; this is an issue that impacts not just the South Asian region but the whole world.”

Pakistan observes Sept.6 as the Defence and Martyrs Day to mark the anniversary of the 1965 war with India.

“Pakistan has launched proactive diplomatic activity in the world capitals as well as in the UN to expose the true face of today’s radicalised India,” said the cricketer-turned-politician.

“I have informed the world that Pakistan does not want war, but at the same time, Pakistan cannot remain oblivious to the challenges posed to its security and integrity. We are prepared to give the enemy the fullest possible response.

“Failing, the world community will be responsible for the catastrophic aftermath.”

Imran said that all of Pakistan was united against India’s “illegal, unilateral, reckless and coercive attempt to alter the status of occupied Kashmir” and added that his country would never leave Kashmiris alone, Dawn newspaper reported.

Celebrations to mark the day kicked-off with a 31-gun salute in memory of the martyrs in Islamabad and a 21-gun salute in all the provincial capitals.

Special prayers were offered for the “independence of occupied Kashmir” as well as for the progress and prosperity of Pakistan, Radio Pakistan reported.

In his Defence Day message, President Arif Alvi said: “We will continue raising their just struggle for freedom at all levels and platforms. Indian brutalities and cruelties cannot suppress their spirit of freedom.”

Addressing a ceremony at the General Headquarters (GHQ) in Rawalpindi, Bajwa said that “Pakistan will never leave its Kashmiri brethren and their cause alone and will keep fighting for them.”

“I want to make it clear that Kashmir is the unfulfilled agenda of the completion of Pakistan. It will remain so until it is a resolved according to the UN resolutions.”

Selection for cricket tourney – The Hindu