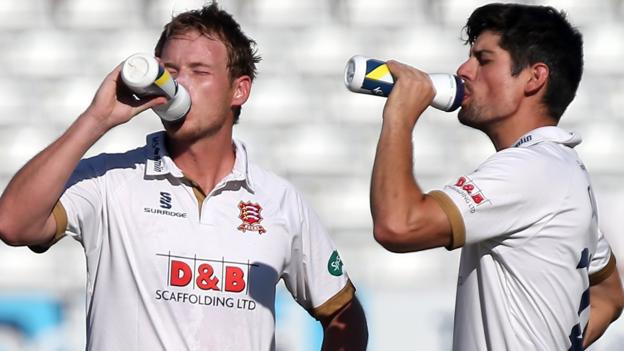 The 10 points that the Bears pick up from the draw mean that they now cannot be caught by Notts, who are doomed to the drop with two games to spare.

Alastair Cook and Tom Westley saw Essex to a draw on 158-2 after following on.

After both sides just failed to claim an extra bonus point from the first 54 balls of the day prior to the 110-over cut-off, Essex, 278-6 overnight, were then bowled out for 324, Westley eventually out for 141.

Following on prior to lunch, Essex wobbled when they lost Nick Browne, who edged young paceman George Garrett to second slip, but Cook and Westley steered their side to safety after tea.

Just when Westley looked set to notch a second century of the match, he fell three runs short when he slapped Matt Lamb straight to Bears captain Jeetan Patel at midwicket on 97.

Hands were then shaken shortly after, with former England captain Cook unbeaten on 57.

Patel took three of the morning’s four wickets to fall, finishing with 6-73, the 38th ‘five-fer’ of his first-class career – and his fourth this summer.

That takes him to 62 scalps for the season, bettered only by he country’s leading wicket taker Simon Harmer, who has 71.

Warwickshire will now no longer have to face a relegation crunch game when they head to Trent Bridge to play Notts on Monday, when Essex host out-of-form reigning county champions Surrey at Chelmsford.

“Essex are a good side, full of confidence, who have won quite a few games this season so it is satisfying to have had the upper hand over them over the four days.

“We kept the game alive on the last morning by taking five wickets on a good wicket. We deserved that and it gave us an opportunity.

“Jeets bowled beautifully from one end for virtually the whole game and the young seamers supported him really well from the other.

“There were a couple of lbw decisions with Cook and Westley that maybe could have gone either way but they batted very well.”

Still to come in the title race

There was a real sense of irony that Nottinghamshire’s fate in the County Championship should have been sealed at Edgbaston, as they will be back on the same ground in eight days’ time to try and end the season with silverware – and claim what is now English cricket’s biggest prize, the T20 Blast, for the second time in three seasons.

But head coach Peter Moores is still disappointed with the way things have gone since returning to the Championship top flight at the first attempt in September 2017 after just one season in Division Two.

Notts rebuilt following their close escape this time last year, when they stayed up only because of Lancashire being docked a point for a slow over rate. But they have lost nine of their 12 games so far – and have not won a Championship game in 15 months.

“It’s been a humbling Championship campaign and all of us are really hurting,” Moores told the Notts website. “There is no escaping the fact that our Championship performances have been way below par.

“The pressure mounted with every game, the winless run continued and it became harder and harder to find a foothold and put numbers on the board.

“The stature of this club commands Division One cricket. We have to put a plan in place to deliver that by winning promotion next season.”

He added: “With the benefit of hindsight, when we sit down as a team of coaches and look at the blend of our team, you could argue that we haven’t got the balance right between young players with an extremely high ceiling and hardened, more experienced professionals.

“We have players here, of high potential, who haven’t come good this year and who we will work with to improve.”

Pakistan’s Airlift raises $12 million in country’s largest Series A to build a decentralized...