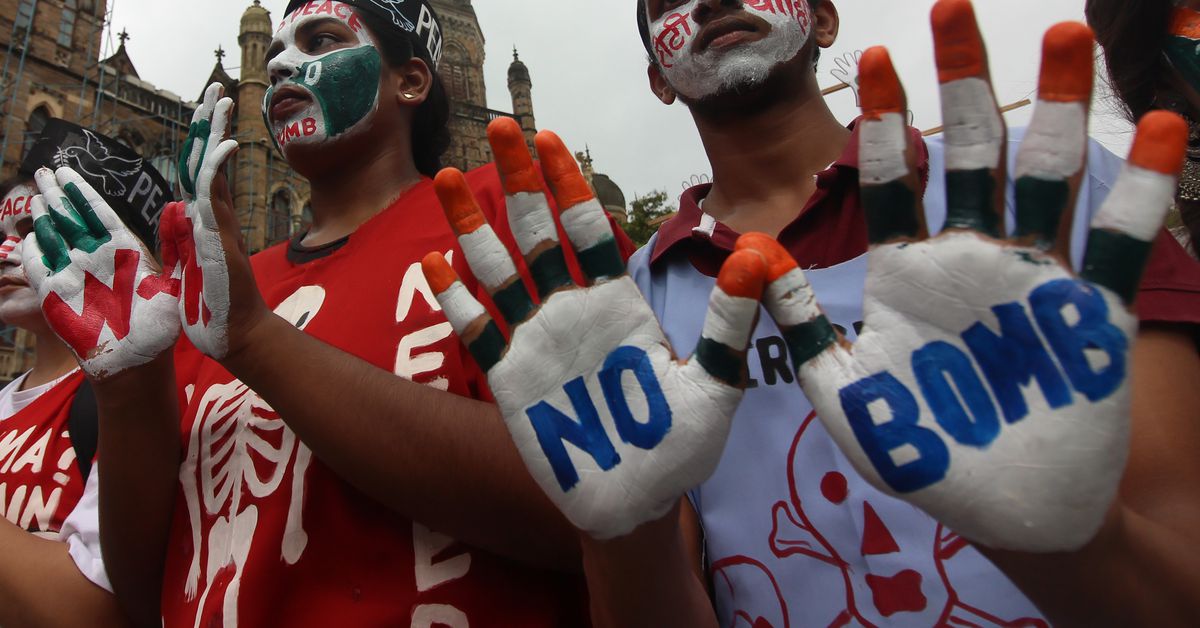 More than 90 percent of the world’s nuclear weapons are held by the United States and Russia. The world’s other nuclear powers — Britain, China, France, Israel, India, and Pakistan — are believed to maintain much smaller arsenals, probably 100 to 300 warheads each. But in the past few years, India and Pakistan are believed to have expanded their nuclear capabilities.

And that, argues a new paper, is a recipe for disaster. In the paper, “Rapidly expanding nuclear arsenals in Pakistan and India portend regional and global catastrophe,” published last week in Science Advances, Owen Toon of the University of Colorado and co-authors analyze the effects of a nuclear war between India and Pakistan in 2025, if both countries continue to expand their nuclear capabilities as they reportedly currently are. Unsurprisingly, the expanded capabilities would make a nuclear exchange between the two countries deadlier and more devastating.

Even if no other country in the world got involved, the effects would be worldwide and devastating. It’s a reminder that having countries with nuclear weapons is a frighteningly unstable situation. While most attention may focus on the US and Russia, any two nuclear-armed countries are more than sufficient for a global catastrophe.

“A war with 15-kt weapons,” — or about the explosive force of the weapons deployed against Hiroshima and Nagasaki — “could lead to fatalities approximately equal to those worldwide in WWII and a war with 100-kt weapons could directly kill about 2.5 times as many as died worldwide in WWII, and in this nuclear war, the fatalities could occur in a single week,” write the authors.

That reflects just the direct effects of a nuclear exchange between the two countries — that is, the deaths caused by being near the bombs when they went off.

The paper also looks at another source of effects: deaths caused indirectly by changes to the climate and atmosphere. Many atmospheric scientists have modeled the effects of nuclear exchanges, and believe that large-scale use of nuclear weaponry would cause ozone destruction and large climate changes, due to the release of dust and ash both by the nuclear explosions and by subsequent firestorms.

The authors estimate “surface sunlight will decline by 20 to 35%, cooling the global surface by 2° to 5°C and reducing precipitation by 15 to 30%, with larger regional impacts.” This would be disastrous, leading to famines across much of the world. They forecast that it’d take more than 10 years for the global climate to return to normal and that, in the meantime, millions more people would die of starvation.

It’s worth noting that the atmospheric science estimates in this paper aren’t settled science. Researchers have produced many different models of the effects of nuclear exchanges on the climate and atmosphere. There’s a lot of uncertainty about whether nuclear exchanges would cool the planet, and for how long the effects would linger. And the scenario that the researchers studied is one that analysts considered plausible, but not the only scenario for war or for atmospheric effects. It should be considered a good starting point, but far from certain.

Nonetheless, the model suggests in more detail what we already knew: Nuclear war between India and Pakistan would be very, very bad, and the prospect gets worse as the two countries acquire more and more sophisticated nuclear weapons.

Of course, India and Pakistan are very unlikely to get into a nuclear war. The same principle of mutually assured destruction that held the United States and the Soviet Union away from nuclear conflict, even during decades of bitter enmity, applies here too. Very few politicians would want to launch a suicidal strike.

But despite the principle of mutually assured destruction, the US and the USSR frequently came terrifyingly close to nuclear exchanges. During the Kennedy administration, the two countries almost plunged the world into nuclear holocaust during the Cuban Missile Crisis. In 1983, a Soviet early warning system reported incoming American missiles. Rather than reporting a strike and potentially prompting a nuclear retaliation, the officer on duty concluded (correctly) that it was a false alarm: The system had picked up the sun’s reflection on clouds and mistook it for missiles. What if someone else had been on duty?

When rival nations have large nuclear arsenals, mistakes or unintended escalations or stupid decisions by leaders can be catastrophic. That makes India and Pakistan’s increasing arsenals nerve-wracking, and it makes the far larger arsenals maintained by the United States and Russia an ongoing cause for concern.

Sign up for the Future Perfect newsletter. Twice a week, you’ll get a roundup of ideas and solutions for tackling our biggest challenges: improving public health, decreasing human and animal suffering, easing catastrophic risks, and — to put it simply — getting better at doing good.

Heather du Plessis-Allan: Cricket fans have a right to be angry – Newstalk ZB