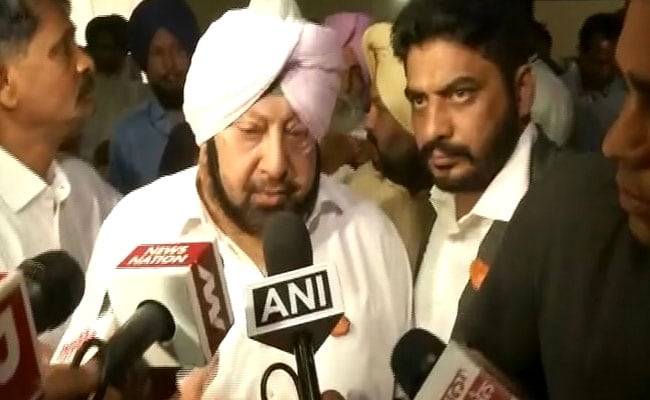 Pakistan has a hidden agenda behind the opening of the Kartarpur corridor, Punjab Chief Minister Amarinder Singh said today, adding that India “will have to be careful”. His remarks came after a video released by Pakistan to mark the opening of the Kartarpur Corridor triggered a controversy for featuring a poster of three Khalistani separatists with “Khalistan 2020” written on it.

“Since day one, I have been warning about Pakistan’s hidden agenda,” the 77-year-old Congress leader told reporters when he was asked about the video. “On one side, they (Pakistan) show love… but on the other side, they may try to create trouble. We have to be very careful,” he said.

The four-minute-long video was released by Pakistan’s Ministry of Information and Broadcasting on Monday ahead of the inauguration of Kartarpur Corridor later this week. The clip shows Sikh pilgrims visiting a gurdwara in Pakistan with a poster of Khalistan separatists – Bhindranwale, Major General Shabeg Singh and Amrik Singh Khalsa – in the backdrop.

The three separatists were killed during Indian Army’s Operation Blue Star in Amritsar in June 1984.

This is not the first time that Punjab Chief Minister has raised concerns about Pakistan. He had earlier said that Islamabad could misuse the Kartarpur Corridor to “revive Sikh militancy” in the state.

On Monday, he said that Punjab is on high alert ahead of the opening of the Kartarpur Corridor.

“I do not expect Pakistan to dare to do any mischief through the Corridor but it is important for Punjab, being a border state to remain on alert,” the Congress leader said.

“The state is keeping close tabs on the situation and is maintaining a heightened alert,” he added.

On party colleague Navjot Singh Sidhu seeking clearance to attend Kartarpur corridor inauguration later this week, Captain Singh today said: “I have forwarded his letter to Centre… It’s upto them to decide.” Mr Sidhu had triggered a controversy after he had hugged Pakistan Army chief Qamar Javed Bajwa at the swearing-in ceremony of Imran Khan last year.  Earlier this year, Mr Sidhu had quit the state cabinet after his ministerial portfolio was changed.

The Kartarpur corridor will connect the Dera Baba Nanak shrine in Punjab with Darbar Sahib in Kartarpur, just about four km from the International Border, located at Narowal district of Pakistan’s Punjab province. It is the place where the founder of Sikhism Guru Nanak Dev is believed to have spent the last 18 years of his life. The corridor will ensure visa free visits of Indian pilgrims to the shrine.

India and Pakistan had, on October 24, signed an agreement to open the Kartarpur Sahib Corridor for Indian pilgrims ahead of the 550th birth anniversary of Guru Nanak Dev.

PM Modi will inaugurate Kartarpur Corridor on the Indian side on Friday.