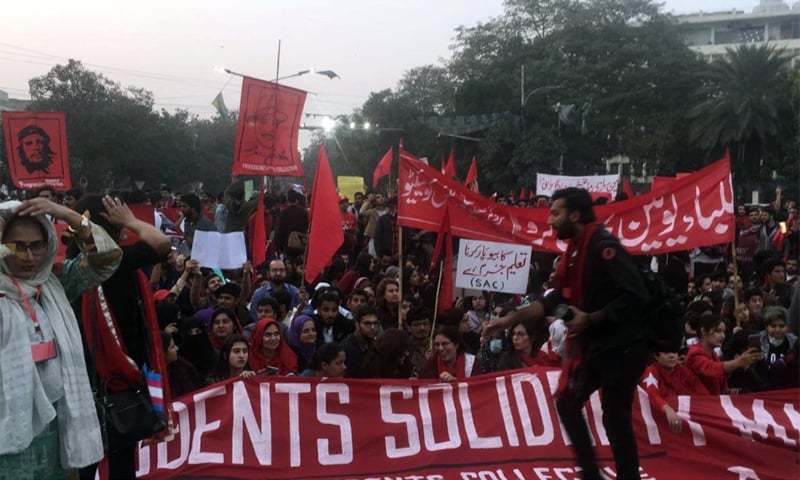 Students, activists and supporters across Pakistan are coming out on Friday to join the Student Solidarity March, led by the Student Action Committee (SAC), to present a charter of demands including the restoration of the student unions.

In a series of tweets, the Progressive Students’ Collective (PSC) shared the final locations for the march taking place in 50 cities of Pakistan. While in some cities the march started in the morning, in others it was expected in the afternoon.

The march kicked off early evening in Karachi, with students, parents, lawyers as well as prominent civil society members — such as Mohammad Hanif and Jibran Nasir — gathering at Regal Chowk and then marching on to Atrium Mall with the aim of reaching Karachi Press Club.

As the demonstration started marching on Fatima Jinnah Road opposite Atrium Mall, shopkeepers started bringing down their shutters.

It has now reached Karachi Press Club where an estimated 400 participants have gathered outside the premises.

Echoes of “Hum kya chaahte? Aazaadi!” are resounding in the area.

Jibran Nasir, while speaking to the media, said: “I have come to support our country’s future. Students are our future. We must realise that our future will never be bright if we keep on lighting monuments of the past.”

“Any real and new leadership that comes forth in the country, will not cross through the corridors of Aabpaara and Pindi. It will come from colleges and universities,” said Nasir.

A transgender student of medicine said she has come to protest the lack of safety for females and transgenders on campus.

“Females and transgender students are increasingly becoming unsafe on campuses. Throughout Pakistan, there are many professors who ask for irrelevant favours from them. The fees are so high. What are they trying to do? Do they think they will provoke us this way? Should girls get into illegal, unethical activities to obtain an education?” she said, demanding answers from the government.

Students from Balochistan are participating in the march in Karachi demanding the arrest of the vice-chancellor of Balochistan University for his alleged involvement in the harassment of the varsity’s students.

Students from Gilgit-Baltistan are also taking part to protest the lack of facilities to pursue higher education in the region. “There is only one university in GB and it is substandard. We can’t study there, so we moved to Karachi,” said one participant.

The city’s students belonging to private universities said they are protesting because of the “price hike, dress code and harassment on campus”.

A woman, who had been active in student politics before student unions were banned, recalled how student activities had formed a crucial part of the political landscape.

“Society has now been depoliticised. In Zia’s time, we were the last political students. Our badges were taken away and restrictions on student unions were enforced.

“We have witnessed society’s regression [since then]. We saw Mashal die. We saw Taliban attacks on universities. All this happened because students were depoliticised and the whole society was depoliticised. As a result, our society has witnessed a decline. So, political struggle is very necessary,” she said.

In Lahore, protesters gathered early afternoon at Nasser Bagh and began their march towards Punjab Assembly. The demonstration is currently outside the Assembly building where a stage is being prepared to offer speakers a platform to address the gathering.

In Peshawar students and civil society members held a protest rally from Peshawar Press Club to the Khyber Pakhtunkhwa Assembly.

Scenes from the march in Peshawar showed a vibrant gathering sloganeering to the beat of a drum. “Students live for the sake of truth,” they chanted.

The protest dispersed peacefully after a few hours.

In a tweet, he said: “The PPP has always supported student unions. The restoration of student unions by SMBB was purposely undone to depoliticise society.

“Today students are marching in the #StudentSolidarityMarch for the restoration of unions, implementation of right to education, end to privatisation of public universities, implementation of sexual harassment legislation, right to student housing & the demilitarisation of campuses. The spirit of activism and yearning for a peaceful democratic process from a new generation of students is truly inspiring.”

Read: Restoration of unions, other demands — students to take to the street in 50 cities tomorrow

Earlier, the PSC and other organisations from all over Pakistan had formed the committee (SAC) at a national level to demand the revival of student unions and other issues. Representatives of student organisations from Sindh, Balochistan, Gilgit-Baltistan, Khyber Pakhtunkhwa, Azad Jammu and Kashmir and Punjab are part of the SAC.

Over the last three weeks, SAC office-bearers have conducted corner meetings in the public and private educational institutions to hold the march in their respective areas. They said the Pakistan Tehreek-i-Insaf (PTI) government had left students dejected and directionless and reduced the higher education budget to almost half, bringing Pakistan into the list of countries that spend very less on education.

Read: Why the Student Solidarity March is being organised across the country

“The reason we are forced to do this on the roads is [because of] an affidavit that every student has to sign before they get admission. Basically there is no ban on student unions but, through certain orders, restrictions are imposed so students will not take part in politics or hold protests on campus,” explained Haider Kaleem, a journalism graduate from Beaconhouse National University, Lahore, who is among those organising the event.

Kaleem, who is also the organiser of the Progressive Students’ Federation (PRSF) and PSC — groups that advocate an open environment for students in order to promote critical thinking — had said that one of the several demands of the march’s participants is to lift restrictions that bar students from forming unions.

He said that the affidavit was also being challenged in the Lahore High Court but expressed little hope of the matter being resolved there.

‘Exhausted all other means, driven to the streets’: Students, others weigh in on motivation to march

Political science student Waqas Aalam said he will march at around 3pm from Karachi’s Regal Chowk to the press club. He told Dawn that there were 10 basic demands but every province or unit did add more to the list as per its needs.

Ahead of the march, scores of Pakistani student leaders studying at international universities had also voiced their support for the march.

In an open letter addressed to the government, students have come together under the banner of the Pakistan International Students Alliance and registered opposition to the current ban on student unions in Pakistan.

At Davos: Afghan and Pakistani leaders, and the Venezuelan opposition, make their cases –...

Pakistan committed one of the biggest blunders by joining U.S. after 9/11, says Imran...